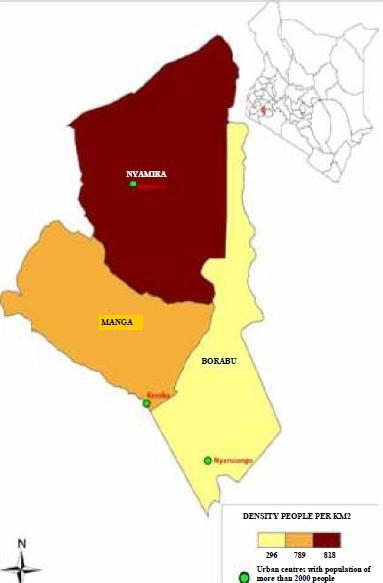 Nyamira is one of the 47 counties in Kenya. The county borders Homabay to the north, Kisii to the west, Bomet to the south east and Kericho to the east. The county covers an area of 899km2 and lies between 00 30` and 0045`south, 340 45` and 350 00` east. Administratively the County has 5 districts namely Nyamira, Nyamira North, Borabu, Manga and Masaba North with 13 divisions, 33 locations and 88 sub locations. Politically the county has four constituencies namely West Mugirango, North Mugirango, Borabu and Kititu Masaba with 20 county assembly wards.

The county`s topography is mostly hilly `Gusii highlands`. The Kiabonyoru, Nyabisimba, Nkoora, Kemasare hills and the Manga ridge are the most predominant features in the county. The two topographic zones in the county lie between 1,250 m and 2,100m above the sea level. The low zones comprise of swampy, wetlands and valley bottoms while the upper zones are dominated by the hills. The high altitude has enabled the growth of tea which is the major cash crop and income earner in the county. The permanent rivers and streams found in the county include Sondu, Eaka, Kijauri, Kemera, Charachani, Gucha (Kuja), Bisembe, Mogonga, Chirichiro, Ramacha and Egesagane. All these rivers and several streams found in the county drain their water into Lake Victoria. The major types of soil found in the county are red volcanic (Nitosols) which are deep, fertile and well-drained accounting for 75 per cent while the remaining 25 per cent are those found in the valley bottoms and swampy areas suitable for brick making.

The two major agro-ecological zones are the highland (LH1 and LH2) and covers 82 per cent of the county while the upper midland zone (UM1, UM2 and UM3) covers the remaining 18 per cent. The county has a bimodal pattern of annual rainfall that is well distributed, reliable and adequate for a wide range of crops. Annual rainfall ranges between 1200mm-2100mm per annum. The long and short rain season start from December to June and July to November respectively, with no distinct dry spell separating them. The maximum day and minimum night temperatures are normally between 28.7c and 10.1c respectively, resulting to an average normal temperature of 19.4c which is favourable for both agricultural and livestock production. Below is the map showing the administrative boundaries.