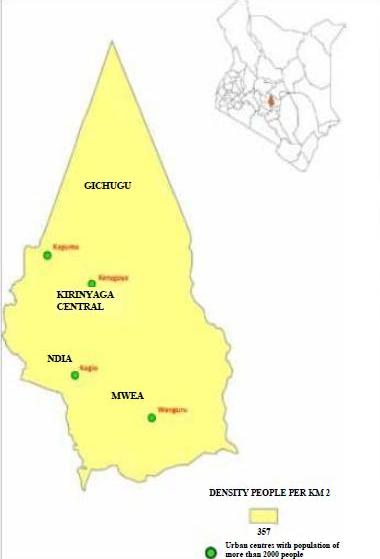 Kirinyaga County borders Nyeri County, Murang`a County and Embu County.It covers an area of 1,478.1 square kilometers. The county lies between 1,158 metres and 5,380 metres above sea level in the South and at the Peak of Mt. Kenya respectively. Mt. Kenya which lies on the northern side greatly influences the landscape of the county as well as other topographical features.

The snow melting from the mountain forms the water tower for the rivers that drain in the county and other areas that lie south and west of the county. The county can be divided into three ecological zones; the lowland areas, the midland areas and the highlands. The county is well endowed with a thick, indigenous forest with unique types of trees covering Mt. Kenya. Mt. Kenya Forest covers 350.7 Km2 and is inhabited by a variety of wildlife including elephants, buffaloes, monkeys, bushbucks and colourful birds while the lower parts of the forest zone provides grazing land for livestock.

The rich flora and fauna within the forest coupled with mountain climbing are a great potential for tourist activities. The county has six major rivers namely; Sagana, Nyamindi, Rupingazi, Thiba, Rwamuthambi and Ragati, all of which drain into the Tana River. These rivers are the principal source of water in the county. The water from these rivers has been harnessed through canals to support irrigation at the lower zones of the county.

The total road network of in the county is 1,109.11 Km, out of which 106.5 Km is bitumen, 462.05 Km is gravel and 540.5 Km is earth surfaced roads. The county has an established road network with 7 tarmac roads passing through it namely Makutano - Embu road, Kutus - Karatina road, Baricho road, Kiburu road, Kutus - Sagana road, Kutus - Kianyaga road and Kabare - Kimunye road. There is only a 5km of railway line and one railway station in the county located in Ndia Constituency but currently not in use.

There is one airstrip located in Mwea constituency.

The mobile phone coverage stands at 99 percent while the number of fixed lines stands at 693 units. There are 5 sub- post offices and 14 cyber-cafes. There is also an increase in the usage of computers and internet in government offices, private businesses and homes due to availability portable modems and affordability of computers and laptops.