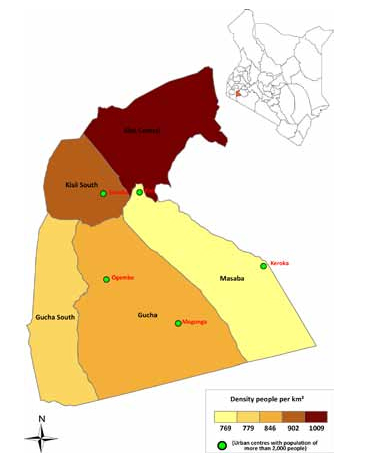 Kisii County is one of the 47 counties in Kenya courtesy of the new constitution of Kenya 2010 which created the new county system of governance. It shares common borders with Nyamira County to the North East, Narok County to the South and Homabay and Migori Counties to the West.

The county`s total population is projected at 1,226,873 persons in 2012.This represents 586,062 and 640,811 males and females respectively. By 2017, this population is expected to rise to 1,362,779 persons (650,982 males and 711,797 females). Population distribution in the county is influenced by such factors as physical, historical, patterns of economic development and policies pertaining to land settlement.

Population densities are high in areas with large proportions of arable land such as Kitutu Chache South (1348), Nyaribari Chache (1128), Bomachoge Borabu (992), Bomachoge Chache (992) respectively. The county is characterized by a hilly topography with several ridges and valleys and it is endowed with several permanent rivers which flow from East to West into Lake Victoria. Soils in the county are generally good and fertile allowing for agricultural activities.

The county has a highland equatorial climate resulting into a bimodal rainfall pattern with two rainy seasons, the long rains occurring between February and June and the short rains occurring between September and early December. The adequate rainfall, coupled with moderate temperature is suitable for growing of crops like tea, coffee, maize, beans, and finger millet potatoes, bananas and groundnuts. This also makes it possible to practice dairy farming in the county.