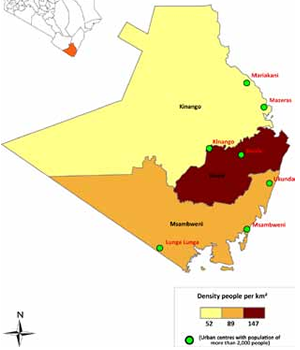 Kwale County is located in south coast of Kenya, it borders the Republic of Tanzania to the South West, and the following Counties; Taita Taveta to the West, Kilifi to the North, Mombasa to the North East and the Indian Ocean to the East.

The County`s capital is Kwale Town which is located 30 km southwest of Mombasa and 15km inland. It borders the Shimba Hills National Reserve. Other major towns include:

Kwale County has four major topographical features namely the coastal plain, the foot plateau, the coastal uplands and the Nyika plateau. Kwale County has a monsoon type of climate; it`s hot and dry from January ?` April while June to August is the coolest period of the year. Rainfall comes in two seasons i.e. short rains are experienced from October to December while the long rains run from March- June/July. The average temperature of the county is 24.2oC and rainfall amounts range between 400mm and 1,680 mm per annum. Seasonal rivers and the Ramisi River form the drainage pattern in the district. The main rivers and streams are Marere, Mwaluganje and river Ramisi. Rivers Marere and Mwaluganje have been harnessed to provide piped water.

The People of Kwale County

Based on the 2009 Kenya Population and Housing Census, the county had a population of 649,931 which accounted for 1.7 per cent of the total Kenyan population.

Kwale County is populated mainly by the Digo and Duruma. These people belong to the Mijikenda ethnic group of coastal Kenya. Other tribes found in the district include the Kambas, Arabs and Indians though to a very small proportion compared to the Digos and Durumas.

The county has rich titanium deposits with extraction activities already on going.
The Monsoon type of climate in the region that is characterized by hot and dry weather between January and April and cool weather between June and August is favourable for livestock rearing which is a main activity in certain parts of the county.

Being criss-crossed by rivers and streams some of which are seasonal, the county has water resources giving the county huge agricultural potential.