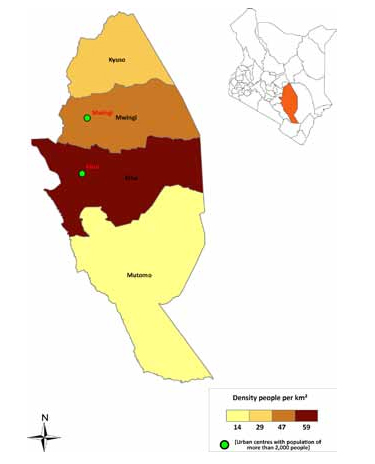 Kitui County is the sixth largest in terms of size and covers an area of 30,520 square kilometers. It is 11th in population size at 1,000,012 based on 2009 census and has steadily grown since. The county is diverse with some areas being semi-arid and mostly dry, while others are fairly arable.

The county, which lies between the altitude of 400m and 1,800m above sea level, is endowed with 14 different kinds of mienrals but the most prominent are coal estimated at one billion tonnes in Mui basin and gypsum in Mwingi area. The two main urban centres are Kitui and Mwingi.

Kitui is inhabited mainly by the Kamba people, followed by the Tharaka who are found in Tharaka ward but there are also sizable Swahili and Somali population. The Akamba speak Kikamba and are considered friendly and welcoming. There are other communities mainly in urban areas.

The county has small-scale industries for honey, gypsum and fruit processing. Most residents are Christians, with minority Muslim populations in the main urban centres. Most Christian faiths are represented, including Catholics, AIC, ACK, Presbyterian and evangelical churches.

The central part of the county is characterized by hilly ridges separated by wide low lying areas and has slightly lower elevation of between 600m and 900m above sea level. The highest areas in the county are Kitui Central, Mutitu Hills and Yatta plateau. Due to their altitudes, they receive more rainfall than other areas in the county and are the most productive areas. To the eastern side, the main relief feature is the Yatta plateau, which stretches from the north to the south of the county and lies between rivers Athi and Tiva. The plateau is characterized with plain wide shallow spaced valleys.

The county can be divided into four agro-ecological zones. Semi-arid farming zone has good potential for agricultural development and is currently either cultivated or under woodlands. The semi-arid ranching areas are less fertile and are used for drought resistance crops and livestock keeping. The Arid-agro-pastoral areas are generally suitable for grazing. Finally, the arid-pastoral zones are suitable for rearing of livestock.

The climatic condition varies across the county in terms of rainfall and temperature. The rainfall pattern is bi-modal with long rains falling in the months of March to May. These are usually very erratic and unreliable. The short rains which form the second rainy season fall between October and December and is more reliable. The county experiences high temperatures throughout the year, which ranges from 140c to 340c. The hot months are between mid-July and September and January and February.

Kitui town is the capital of the County Government of Kitui, 160km east of Nairobi and 75km east of Machakos. It used to be the capital of the Kitui District in Eastern Province. It has eight constituencies and 40 wards. Kitui town is hot, though the nights can be cold. Although most of the sites are located in the outskirts of town, Kitui is a busy trading center, its streets lined with arcaded shops. Monday and Thursday are market days.