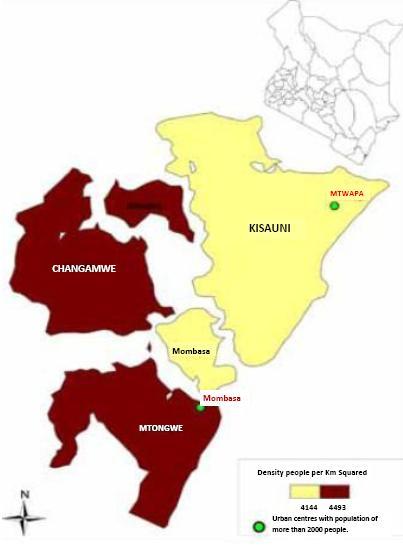 Mombasa County is located in Coast province and constitutes 4 constituencies (Changamwe, Kisauni, Likoni and Mvita). Kilindini and Mombasa districts were mapped to this county for the purposes of generating county estimates.

Mombasa has a long history the traces can be found from the writings of the 16th century. Many traders did attempt to enforce their governance on the town due to its advantageously central location, where Arab influence is felt prominently till date.

The town of Mombasa remained the center of the Arab trade in ivory and slaves from the 8th to the 16th century. It is known that Arab traders sailed down around to the coast of Kenya from the first century AD who continued to build trade along the ports of Mombasa and Lamu.

Portuguese also had their influence on the port that changed the face of the land by burning it almost three times. It is believed that Vasco da Gama was the first known European to visit Mombasa, whose purpose of exploration was to spread the Christian faith to further expand Portugal`s trading area. Mombasa became Portugal`s main trading centre of spices, cotton and coffee, where Fort Jesus was constructed. The Fort served as the major center for trading goods that protected the Portuguese from conflicts with locals the remains of which still attracts a great deal of tourists and visitors. As slavery was highly practiced during that era, the local slaves were exchanged for goods.

Until 1698, the Portuguese controlled the city, but soon the Omani Arabs took over the charge.

Finally, the British took control of Mombasa in 1895, wherein the British East African Protectorate was established.

Colonization perpetuated in Mombasa that promoted European culture over the town and the Kenyan lands. Like in India, the British gained momentum and established control of the port. They even completed a railway line in the early 1900`s from Mombasa to Uganda which is perhaps the major landmark in the history of Mombasa. Thus, from 1887 to 1907, Mombasa remained the capital of the British East Africa Protectorate.

The British rule ended and Kenya received its independence on the 12th December 1963. From herein, began the creation of political parties and unions that faced elections for the formation of a stable government. Though significant political shifts and oppositions led to violence, the pressure from the international and African community led the leaders to finally come to a consensus and form a power-sharing agreement.