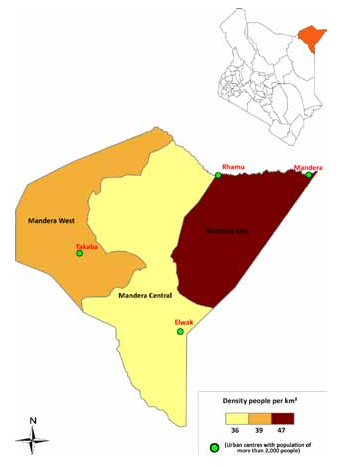 Mandera County is one of the 47 counties in Kenya, located in the North Eastern part of Kenya and borders Ethiopia to the North, Somalia Republic to the East and Wajir County to the South. It is about 1,100km from the capital city of Nairobi by road. The county has an approximate population of 1,025,756 and covers an area of 25,991.5 km2. The County Administratively is subdivided into six Sub Counties namely Mandera West, Mandera South, Banissa, Mandera North, Mandera East and Lafey and further to 30 administrative wards.

Nomadic pastoralism is the major economic activity in the in the county with camels,goats,sheeps&cattle being the main type of livestock reared. The region vast pasture land has allowed this activity to be viable.

The main water sources in the region are river Daua a number of shallow wells and few major earth pans. The region has small scale agriculture production with small scale horticulture producers supplying Mangoes, pawpaw, onions, kales and Banana to the local market.